My intention here was to only spend some time clicking few pictures from my newly acquired Lumia 950 XL, and for once, do the Momentum in-ear wireless some much deserved justice in pictures alone, because, from simply considering them as a piece of manufacturing art and pure class, these do need close-up attention, the same way Sennheiser intricately paid attention to the really fine aspects like the ultra-soft sheepskin Nappa leather stitched onto the neckband which in all subtlety cries out loud “I am Rich”……..in an uncanny and modest way…….just like how we have come to know off from the Germans take on style and class even in the Automotive world…….understated yet a thing of beauty……and impeccably engineered ofcourse!

However, reviewing these wireless pair of in-ears were a no-brainer, given the fact that these fall into the category of niche lifestyle products, where people not only expect great sound, but luxury and making a statement is the need of the hour in terms of standing out and being classy, without losing out on the charm of being a dark and sporty presence when needed!

This product was bought by me with my own funds and not sponsored or paid for in any way which would affect the proceeding of what you would read in the review further. 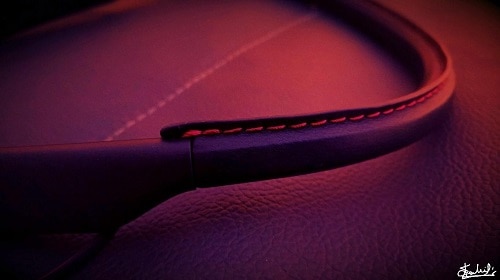 Now this is a very subjective perspective, but the Momentums are very good at it to be very honest. People wondering if a neckband will be heavy and intrusive, these aren’t one of them!

Infact, you will be actually surprised at how you completely forget that these are even on your neck, say after a couple of minutes of them being on.

In addition, since a substantial amount of footprint is actually touching the skin when worn on a non-collared T-shirt for instance, the actual contact of the Momentums to the skin is very pleasant.

The soft and plush Nappa Leather makes sure that, there never rises an occasion where there could be any discomfort whatsoever. On the contrary, these are not meant for gym uses wherein you sweat profusely, reason being, well…….we know what happens when sweat and leather play foul in a humid weather and we don’t want to get into details of the odour that they give-off or the colors that they show-off!

Also, even though the neckband is pretty light and non-intrusive, running or jogging can unsettle them and they do bounce around, hence, these aren’t the best gym buddy to get. For every other instance / situation, these absolutely shine, especially in a corporate environment, tucked away under the collar, quietly & calmly, not drawing any attention to them whatsoever.

Special mention needs to be given to the ergonomics of the Momentums mainly for the ease of use of the in-line controls neatly tucked away on the side of the left stalk with prominent, raised and well separated buttons for easy feel and usability even in the dark. With one or two tries, the layout gets easily memorized and it’s a cakewalk controlling them from there on.

Fit in ears is pretty good too and the provided silicon has the right balance in between sound isolation and comfort. 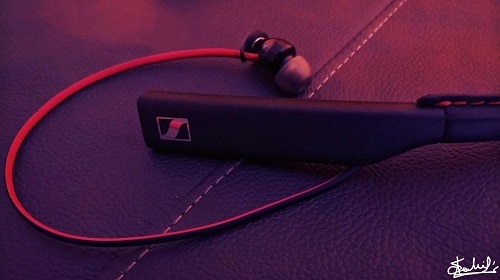 Connection duties are taken care by the familiar and known codecs like aptX and AAC for high resolution streaming and the connection with Windows PC & Mobile, Android and iOS is completely flawless and there is absolutely no stuttering whatsoever. There is NFC on the right stalk for those quick tap-to-pair needs.

Also neatly packed into the headband is the tiny vibration motor which vibrates and makes you aware of incoming calls. A neat and handy feature really. Two devices can be connected at a time simultaneously as well which is again, a feature which every wireless pair of headphones or in-ears must have.

The main reason for the thick and chunky neckband however, is the battery that Sennheiser claims lasts 10 hour on a single charge. This is one of the first instances where I found Sennheiser to be on the defensive with their numbers with this product. (There are a couple of more instances where Sennheiser has shied away from elaborating or completely forgot about mentioning certain features on the Momentums in the packaging, on their site or manuals).

Since I am using these as my daily drivers, a continuous usage with non-stop play of music & taking calls made the Momentums to last an average of 12-13 hours! Infact if you keep the volume levels controlled at an optimal level on the Momentums themselves at say 60%, these give you upto 16 hours of battery without an issue!

This is one of the many things that once again, Sennheiser decided to let go and not elaborate much in their product materials & descriptions: That the Momentums support USB Audio.

Now many of you may think and even cry foul on what’s a really big deal about USB Audio. Lots of Wireless ‘headphones’ support them nowadays. But, it’s unheard off in wireless in-ears.

Why is it a big deal? Well, since these are a wireless pair of in-ears, unless you connect them via apt-X which claims CD quality streaming which still isn’t really hi-resolution for those number savvy audiophiles, in USB Audio mode, the Momentums use the internal DAC/AMP of the product, bypassing the phones / PC’s mediocre circuitry.

And while doing that, not only do the Momentums charge themselves, they also decode / support upto 24-bit 48kHz on their own. And this has an impact on sound……not drastically but quite some difference! (Will get to that in the sound part).

Also to note is that, the Momentums support USB Audio on both Windows and MAC and on Android devices using an OTG adapter. No drivers are required, just plug and play! Also, on Android, apps like Hiby and UAPP automatically detect the Momentums as a USB DAC and take full control of them, even able to run in Bit Perfect mode! Now that’s definitely a feat for a pair of wireless in-ear’s! 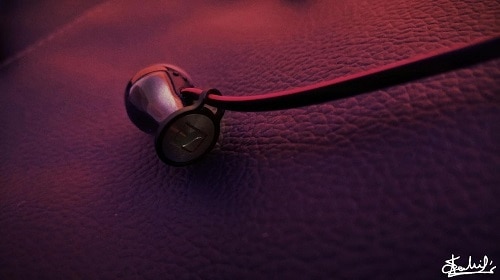 At first listen it gets pretty obvious that Sennheiser hasn’t strayed away from the signature and athletic sound that we have heard/ come to like on the wired Momentum in-ears. However, there is something which very distinctly separates the wired Momentums from the wireless.

The wireless Momentums sound slightly more open, more balanced and more forward sounding! It’s not a night and day difference again but this probably has more to do with the fact that Sennheiser has the upper hand on the tuning this time round and how they wanted these to sound, once paired with any device thanks to the internal dac/amp.

On the wired Momentums, the sound varied drastically from source to source, from being muddy at times to being too recessed in the mids and lack-luster in the highs to being too harsh too. These traits seems to be worked upon and fine-tuned by Sennheiser in this pair.

This is the first thing that you will notice that takes precedence first and foremost over everything else, purely for the fact that the bass reproduction is simply just “really well behaved’’! There is deep extension and slightly longer decay yet very punchy.

There is some mid-bass bump in the FR which lends a really good body to kick-drums and bass guitars making genres like dance, hip-hop, heavy metal and EDM’s sound absolutely fantastic.

FR impression could suggest that there would be bass bleed into the lower mids but that isn’t the case here for the most part. The low end is very satisfying as it is detailed and nuanced while also very potent. Using the USB Audio feature adds a hint more body to the low end.

The Momentum wireless in-ears get their main detailing from the upper mids which isn’t a bad thing for a V-sounding iem. Male vocals could sound a little un-natural and hard sounding but its nitpicking really.

On the other hand, Female vocals sound absolutely amazing, extremely clear and full of life! Even though the lower mids are slightly recessed, the overall impression of the mids is that it’s quite forward sounding, a little thick with a rich and full body sound impression and crystal clear, not overshadowed by the bass or the highs.

On USB Audio, these sound a tiny bit more forward and the lower mids have a slightly better resolution to them.

This is the part where many iem’s really could lend the decision of a purchase or no-purchase purely based on how the highs are portrayed.

You will be happy to note that the Momentums almost absolutely nail the highs with this pair. There is a fair bit of extension present here, yet, they are nowhere even remotely close to being bright or sibilant. In-fact, just for heck of it, I went to the extent of EQ’ing them to see how much treble extension can these really manage well enough.

The result with this non-scientific and really lame experiment brings us to the conclusion that, no matter what you do, you really cannot get these to falter really badly. Under extreme EQ’ing also, sibilance is at control and these simply do not get into the ear-piercingly high treble territory.

The high end is crisp, and comes through very well. The crash of a cymbal is simply very beautifully sharp & crystalline, while guitars and synthesizers at the higher end are also crisp and vibrant and well portrayed. On USB Audio, the treble gets a little more energy to them which makes them feel even livelier. 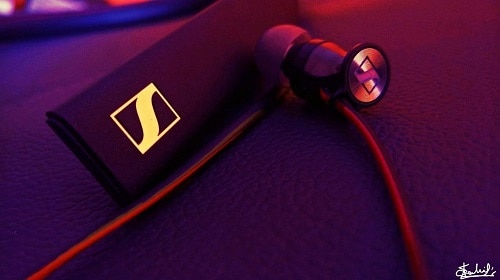 For a wireless pair of in-ears, the Momentums are a no-brainer on multiple fronts, in-fact these are the most rounded package I have come across in a long time. More importantly, and this is a personal opinion, but why do we really get a wireless pair of headphones or earphones? Isn’t it for the sake of easy commute (read: not while self-driving) and ease of not having wires and dac/amps attached to you at all times?

To me, a wireless gear is more so for convenience and a fun & engaging sound, rather than for an outright audiophile sound for critical listening. For that we could have a desktop setup at home with an open back headphone to satisfy and fully do justice to your audiophile cravings.

This is where the Momentum in-ears fit in. A fun and lively pair of in-ears, which are a perfect pair for your outdoor casual listening activities, office meetings, and also for some non-intrusive critical listening too from time to time!

Their tonality is excellent and the imaging is bang on the money. Soundstage for a pair of closed in-ears is really appreciable, especially when using the USB Audio feature!

The Momentum in-ears truly need a listen, to really appreciate what wireless in-ears can really get you today!

Pros and Cons of Instant Cameras

Rs. 3,499
Added to wishlistRemoved from wishlist 0

12 Best Bluetooth Earphones Under 1000 in India